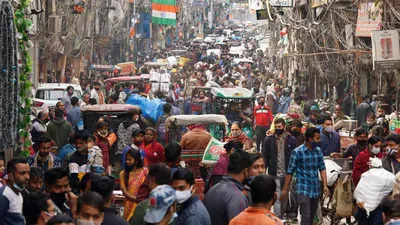 NEW DELHI: Daily Covid-19 cases dipped sharply in Delhi and Mumbai on Friday but it was unclear whether the decline was on account of falling infections or a discernible drop in testing in the two worst-hit cities during the current wave.

India recorded a marginal rise in cases with just under 2.70 lakh infections detected on Friday as compared to 2.64 lakh the day before. Testing across the nation too dropped to 17.87 lakh, down from 18.86 lakh on the previous day.

In Mumbai, cases fell for the second day running, with 11,317 new infections emerging on Friday, a dip of 17% over Thursday’s numbers. Both cities saw a significantly lower number of Covid tests conducted on Thursday as compared to the peak in the past eight days.

Yet, there was an important difference in the Covid data of the two cities. While the test positivity rate (TPR — the percentage of tests turning positive for Covid) was generally declining in Mumbai, it has been consistently rising in the national capital. Mumbai’s highest TPR (in the last eight days) was 28. 95% recorded on January 7, which had fallen to 20. 6% on Friday.

Delhi, on the other hand, returned a TPR of 30. 64% on Friday, the highest in recent months in the capital. Friday’s case count in Delhi came out of 79,578 tests, the second lowest in the past eight days.

In Mumbai, 54,924 tests were recorded, the lowest in the past eight days. Data suggests that a rise in the number of tests would lead to higher detection of cases in both cities. But a drop in TPR indicates that Mumbai may have reached its peak in infections while that doesn’t seem to be the case in Delhi. In the national capital, nearly every third sample tested positive for the viral infection on Friday and daily TPRs have consistently risen from 17.

73% on January 7 to 30. 64%. Meanwhile, both cities saw a relatively high number of deaths on Friday although the numbers remained far fewer than those in the second wave of the pandemic. At 34 fatalities, Delhi’s toll on Friday was the highest among all states.

Mumbai reported nine deaths, the highest daily toll in the city in five months. The country reported 217 deaths from the virus on Frid ay, the third consecutive day of over 200 fatalities.