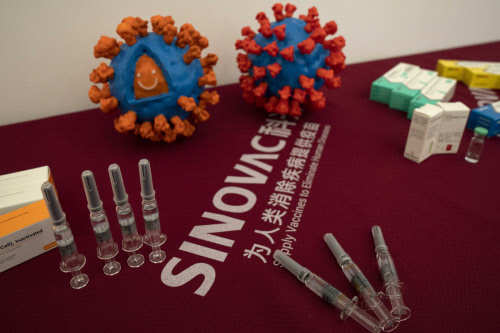 Europe’s medicines watchdog said Tuesday it has started reviewing China’s Sinovac coronavirus jab, a process that could lead to eventual approval for the European market.

Made by Sinovac’s Beijing-based Life Sciences unit, the vaccine by the Chinese biotech firm is the second shot developed outside the West after Russia’s Sputnik V to be considered for European use by the European Medicines Agency.

The EMA‘s human medicines committee’s “decision to start the rolling review is based on preliminary results from laboratory studies (non-clinical data) and clinical studies,” the Amsterdam-based agency said.

“These studies suggest that the vaccine triggers the production of antibodies that target SARS-CoV-2, the virus that causes Covid-19, and may help protect against the disease,” it said in a statement.

The Sinovac vaccine contains an inactivated form of coronavirus that cannot cause the disease. It also has a substance that helps strengthen the immune response to the vaccine.

When given the shot, the immune system identifies the inactivated virus as foreign and then makes antibodies against it, which will also recognise the active virus and defend the body against it, the EMA said.

The EMA will now continue the review until there is enough information for the company to make a formal application for it to be released to the market.

“While the EMA cannot predict the overall timelines, it should take less time than normal to evaluate an eventual application because of the work done during the rolling review,” it said.

Sinovac’s shot was approved by China’s medicines regulator for use in February.

Currently the Sinovac vaccine is in use in at least 22 countries including several in Latin America, Africa and Asia, according to an AFP count.